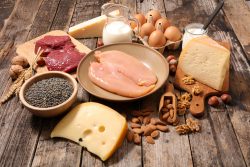 New research has revealed that there are potential side effects and ongoing ramifications from long term protein intake or from certain types of amino acids. There has long been popularity and attention paid to consumption of proteins, however less attention has been paid to looking at its possible problems.

Amino acids have been touted by the bodybuilding and fitness communities for the muscle building benefits gained from their consumption. From lean mass promoting snack bars to ultra bulk protein powders, there certainly is no shortage of protein products.

BCAAs are known for adding muscle mass, but the new science says people could pay for it later. The research team investigated how the complex role nutrition plays in mediating various aspects of reproduction, appetite, aging, and metabolic health.

What they found was that diets high in protein and low in carbs are shown to benefit reproduction function, however can have detrimental effects on health in mid late life and can also lead to shortened lifespan. They also note that BCAAs can influence mood which can lead to overeating.

The team examined the impacts that BCAAs and other essential amino acids had on the body composition and health of mice. Results from supplementation of BCAAs showed high levels of BCAAs in the blood of the mice which competed with the amino acid tryptophan for transport to the brain.

Tryptophan is the sole precursor for serotonin which is known as the happiness chemical. It typically enhances mood and plays a role in promoting sleep. And it does more than this which is the problem. The BCAAs lowered serotonin levels in the brain which in turn is a potent signal for increased appetite. This serotonin decrease due to the BCAA intake resulted in massive overeating in the study mice who became very obese and lived shorter lives.

The mice were fed double the amount of BCAAs, 200%, the standard amount, 100%, half the amount, 50%, or one fifth, 20% for life. The mice fed 200% increased their food intake which resulted in obesity and shorter lifespan.

The new research has shown that amino acid balance is very important and it is best to vary sources of protein to make sure there is the best amino acid balance. BCAA's are essential amino acids containing isoleucine, valine and leucine, however over comsuming them may have negative consequences. Dairy and red meat contain the most BCAA's with fish, eggs, and chicken also fairly high so these foods are better eaten in moderation. Whey protein found in many fitness protein products contains high levels of BCAA's so is better avoided.

Nuts and beans are good sources of BCAA's because they supply enough, but not too much. Nuts and seeds are rich in the amino acid tryptophan.